Zenkoku Ryukyu Te Kenkyukai
As a hozoin ryu (preservation style), lineage is very important. Lineage helps establish a legitimate connection to the source. In an age when the internet is flooded with information and many supplement their training with online study, having a strong lineage helps ensure vital details are maintained and preserved that would otherwise be left out if one was studying through video alone. Detailed below are the various influences of our art. Please note that the logos and organizations shown here are for lineage purposes only. The Zenkoku Ryukyu Te Kenkyukai is independent and not officially connected to the organizations below. 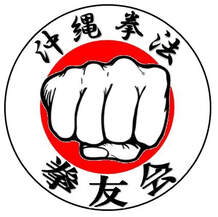 Okinawan Kempo - The primary influence of our Ryukyu Te Kempo Jutsu is Okinawan Kempo, established by Nakamura Shigeru from his training under various Okinawan instructors, such as: Yabu Kentsu, Hanashiro Chomo, Higashionna Kanryo and Kuniyoshi Shinkichi. He referred to his art simply as Okinawan Kempo, previously a generic term used by many instructors, as he felt there are no "styles" of Uchinadi on Okinawa. Our connection to Okinawan Kempo comes through the Kina Toshimitsu lineage (logo shown at left). 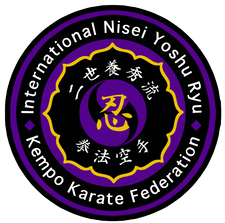 Nisei Yoshu Ryu - Established by Carlos Febres, Nisei Yoshu Ryu is an adaptation of the original Yoshu Ryu Karate in hopes to bring the art closer to its roots in Okinawan and Japanese Karate, and is largely descended from Chito Ryu, itself a blend of Shorin Ryu and Shorei Ryu. Chitose's student Yamamoto Mamoru established the Yoshukan dojo, which would later be changed to Yoshukai. Michael Foster studied under Yamamoto and would later establish the Yoshukai in America. Foster's student, William Solano eventually left the Yoshukai to establish his own art of Yoshu Ryu Karate. However, Solano later chose to pursue a deeper study of Matsumura Seito Shorin Ryu and would step away from Yoshu Ryu. Carlos Febres chose to carry it on under the name Nisei Yoshu Ryu and was officially named as successor by Solano in 2015. 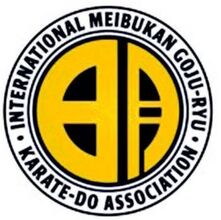 Meibukan Goju Ryu - Yagi Meitoku established the Meibukan dojo in 1952, having studied Goju Ryu under the art's founder Miyagi Chojun. He was the first student of Miyagi's to be given permission to open his own school, and is the recognized Menkyo Kaiden holder of Goju Ryu having been awarded Miyagi's personal gi and belt. Yagi would also go on to develop his own series of kata based on Goju Ryu principles, known as the Meibuken series. Upon Yagi's death in 2003, his eldest son Meitatsu took over the International Meibukan Goju Ryu Karate Association. Steven Hatfield became a member of the IMGKA in 2018 and remains an active student of Yagi Meitatsu, later bringing in both Bret Gordon and Leon Major. 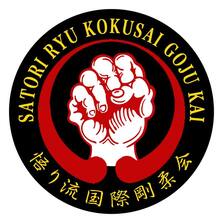